We Are Ladybug Landscaping

Proudly Serving our local community for over 18 years

No matter what your outdoor needs, we have a natural solution for you!
Our experienced landscapers set the standard each day in landscape design, paving, hardscaping. We will whip your yard into shape in no time. 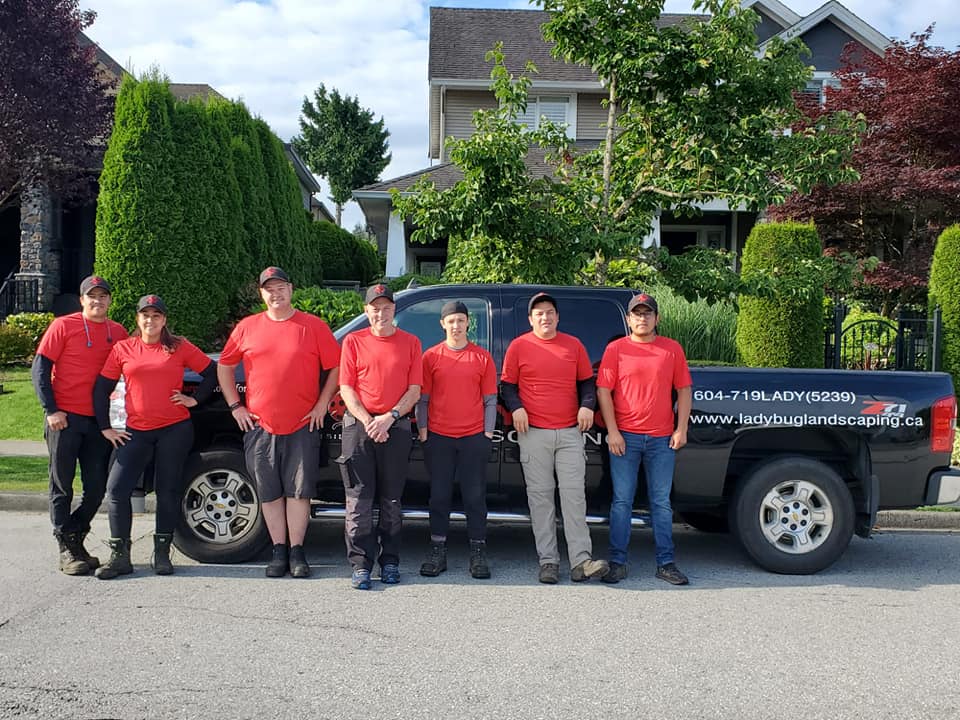 Some of the Ladybug's hardworking team of experts

Ladybug Landscaping, established in 2002, is a Canadian landscape company based in Surrey, BC.

Ladybug Landscaping was born. From the humblest of beginnings where we exchanged landscaping and gardening service with our neighbours for rhubarb pie!

18 years stronger, with a Hort. Dip. and Organic Master Gardener certification, James and his staff are proudly serving the Lower Mainland in all aspects of landscaping.

We at Ladybug Landscaping are proud to offer carefully designed landscapes crafted to suit our clients’ preferences while prioritizing sustainability and natural solutions.

We love to take pride in the work we do. Each project is finished on time and budget

Operating for more than 18 years, earning a reputation for service and beautiful work

This story begins almost 10,000 miles away where James grew up on a 16,000 acre farm in Harare South, Zimbabwe. From a young age, he always knew he wanted to do something with the earth. Watching his father tend the lands as a boy, he was inspired to do everything with a full and happy heart. James assisted when he could between boarding school and rugby fixtures, always delighting when a new bloom appeared, or a new legume surfaced.

Sadly, the farm was lost in the Land Redistribution Act of 1998. Being kicked off the farm, Gilston, that had been in the family for 4 generations was devastating, to say the least, but if there is one word to describe a Zimbabwean, it is "resilient".

With a thousand dollars that he borrowed from his mother, and after selling all his possessions, James moved to beautiful BC, Canada. It was here that he realized that opportunities abound! He met many amazing Canadians in a very short space of time, including a wonderful woman on his travels in Vancouver, and they decided after a short time to get married. Not legally allowed to work in Canada he used his time between the library and fixing up the backyard for the wedding. Under the guidance of a trained horticulturist, his passion for plants, colour and spatial awareness grew with each passing moment he spent building a water feature, learning how to prune trees properly (and tending the veggie garden as well!)

His neighbours, both of whom were avid gardeners themselves, assisted him with all manner of different plant suggestions to create a fabulous backdrop of complimentary colours for his wedding. The wedding arrived, and there were so many positive comments and accolades from the guests and family, that James decided this would inevitably be something that he would enjoy doing for others.

On March 23, 2002, Ladybug Landscaping was born. From the humblest of beginnings where he exchanged landscaping and gardening service with his neighbours for rhubarb pie!

Now in 2020, 18 years stronger, with a Hort. Dip. and Organic Master Gardener certification, James and his staff are proudly serving the Lower Mainland in all aspects of landscaping whether it be design, installation and/or maintenance. Will your garden be next?

"We're in White Rock, and we had some challenging issues with our garden, but James provided us excellent, practical suggestions, most of which we went with. The staff are always friendly and quick to explain and inform. I would recommend Ladybug Landscaping to anyone."

"Don't hesitate and waste time on others who claim to be a landscaper... Or some big chain who hands you a list to tick off, zero personality and adds this and that to jack up the prices... Been there, done that... Id rather have a family run business with something invested in a happy outcome."

"Great service, very friendly, always do 'a little more' they what they came to do. James can be harder to get a hold of during the busy season, which is understandable, but his service and great personality more than made up for it!"

"When we hired Ladybug in 2012 it was apparent James had extensive training in the field of landscaping and lawn care. The staff were polite and worked well during the times spent each week in lawn cutting during the season. When grass cutting was done, the clean-up was first class, the same when the garden work was done. We intend to keep using this company for our lawn and garden needs"